I’m so excited to announce that my new book How to Make a Budget Work for You is available for pre-order and will be releasing next Monday!!! One of the things I have found is that there are some BIG Misconceptions out there about Budgeting! Sometimes I forget not everyone loves a budget as much as I do ;) So I thought I would debunk some of the myths that people have about budgets!

WRONG! Have you seen this post about 10 Lottery Winners who went broke? I think one of the most common misconceptions is that if you don’t have much money you need a budget and if you have enough to live on you’ll just wing it every month. It doesn’t matter how much money you have, It’s important to know where you are spending your money and make wise financial decisions. You shouldn’t just be spending anything you want because you can afford to cover the credit card bill at the end of the month. Budgets are about more than limitations it’s about setting a plan and taking charge of your money.

I know personally this has been a huge shift for me. I like to be able to buy what I want and learning to live on a budget has taught me that it’s not that I can’t have those things, it’s that it’s wiser to save and prepare and plan to buy them rather than just blowing money when I don’t know where it’s going to come from.

3. Budgets are Too Restrictive

WRONG! Want to know a secret? I actually love having a budget because I am not worried about every single purchase. There is so much freedom in knowing you have money to buy something without causing a domino effect in all your other finances. To be able to purchase Food or Clothing without on affecting the other is Freedom! I also love that I don’t have to go ask permission to buy clothing for example or splurge on lunch out with a friend because those are budgeted categories and I know within that category I have freedom to spend that money as I choose! It’s really all in how you look at it!

4. I Don’t Have Time to Make a Budget

It’s so easy to think that Budgets take too much time because they do take time. But you know what else takes time? Dealing with Creditors calling for late payments, Paying over draft fees on your debit card, Fighting over expenses that should or shouldn’t have been spent, Juggling money around to pay off one bill before another is due. Living a financial life of Chaos also can be very time consuming. By taking the time to plan on the front end you avoid the hassle and time spent fighting to get back on track on the back end.

I always say this about having “Money Meetings” You’re probably having money meetings one way or another, you either have them with your spouse before the month begins and before you spend money or you’re having them during the month when you’re fighting over how the money was spent. Being pro-active is a great way to gain control of your money and save some relationships along the way!

5. I Can’t Budget because I Don’t Make the Same Amount Each Month

If you live on a flexible income (meaning your income changes from month to month) it can be hard to get started making a budget. However it’s actually more important than ever because you want to make sure you cover the most important expenses first. When working on a Flexible Income it’s important to cover things like your house, food, clothing before entertainment or fast food. Start with a list of everything you spend money on and number the items in importance, this forces you to put priorities on things. Then work your way down the list starting with number one assigning a value of how much you need each month. As money comes in set that money aside for #1 until it’s covered then move to #2, etc. You might not make it as far down your list as you would like but you will have the essentials covered first and it will help you see what might need to be cut.

I have more information on a Flexible Budget and how to assign values to each spending category in my book How to Make a Budget Work For You!

Using a budget really isn’t as bad as most people make it out to be the hardest part is getting started and being disciplined to stick to it! Remember, you get to be in control of your money by deciding what you want to spend it on, what’s the most important to you as a family and then maybe what you’re willing to sacrifice for long term financial success. 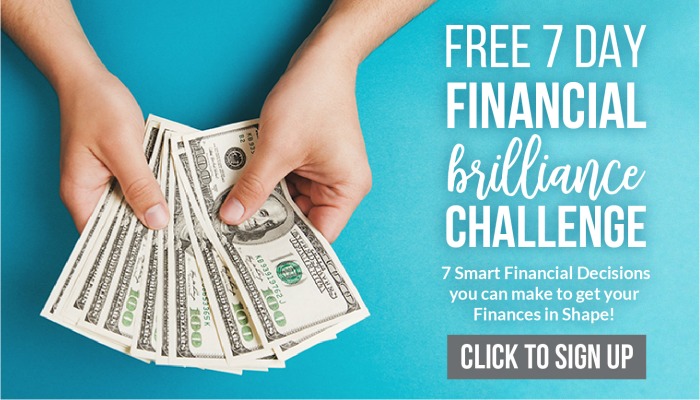 Do you want to Take Control of Your Finances? Are you struggling to make a budget work, spending more than you’re making? This FREE 7 Day Financial Brilliance Challenge is for you! You’ll learn how to take control, get organized and make a budget work for you!